There are lots of corals and fish you'll encounter on a trip to the Great Barrier Reef. Here's a guide to some of the most common sightings, so you'll know what to find and what to expect!

Christmas tree worms are named after the colorful, spiral breathing structures they extend into the surrounding water which resemble tiny Christmas trees. The trees are the mouths of the worm and each spiral is composed of feather-like tentacles that collect fine particles to feed on. Any danger, sudden movement or sounds near the worm, they quickly retract the fans into the chamber, and a hard cover (called the operculum) is pulled over the top like a trap door.
The colours of these fans range from orange and yellow through to blue and white.

Clown Fish are a familar sight on the Great Barrier Reef and universally well known ever since the movie Finding Nemo. They mainly inhabit shallower waters, making them easily spotted by snorkellers. Clownfish live in a "symbiotic" relationship with certain anemones, and are the only fish that are able to live in sea anemones and not get stung by their tentacles. They wear a slimy mucus covering that protects them from the sea anemone. The clownfish and the sea anemone help each other survive in the ocean. The clownfish, while being provided with food, cleans away fish and algae leftovers from the anemone, meanwhile the sea anemone is given better water circulation because the clownfish fan their fins while swimming about. Clownfish develop into males first, and when they mature, they become females. In a group of clownfish, there is a strict hierarchy of dominance. The largest and most aggressive female is found at the top!

Sea cucumbers are the quiet achievers of the ocean when it comes to protecting the Great Barrier Reef. They are the vaccum cleaners of the sea, turning over the sediment, oxygenating it, and making nutrients available to other organisms, including corals. These slow moving creatures breathe through their anus! and they shoot out a sticky goo as a self defence mechanism to entangle any would be predators out there.

Humphead maori wrasse can be easily identified by their huge size, prominent hump on the forehead and thick rubbery lips. Fondly known as Wally. This very friendly, personable fish is regularly spotted at reef sites inspecting snorkellers and divers with his beady eyes. Unfortunately, the friendly nature and good eating of the Maori Wrasse has led to their depletion in numbers. Napoleon Wrasse are protogynous hermaphrodites, meaning that they can change sex, but only from female to male. The reasons for this change are not fully understood, but it has been noted to occur when males are in short supply, and so a female - often around the age of 8 to 10 years old - will turn into a male to fill the void.

Come along to Reef Teach before you go out to the reef to help get the most out of your Great Barrier Reef experience. Reef Teach provides an entertaining evening of amazing facts, beautiful images, and the opportunity to handle a wide range of corals and other marine specimens. It will amaze, inspire, and captivate you, and have you laughing about the funny facts and weird and wonderful ways in which the reef works!

In this show they will take you on a tour of the Great Barrier Reef with the use of 100’s of high quality images, videos and hands on reef specimens. Learn about: Common fish, corals and other animals, Fish and corals changing colour in front of your eyes! Fish visiting cleaning stations and being groomed by other fish! The special relationships between “Nemo” and the anemone, corals and algae, “Wally” and remoras! They will also share tips a range of tips from how to avoid being seasick to how to take a good photograph underwater! Reef Teach is passionate about reef conservation and will share information on some of the threats to coral reefs, and how you can help look after marine life for future generations.

Reef Teach is staffed by qualified marine biologists (all have PhD’s or MSc degrees).
Find out more -->

You can visit the turtles and learn more at the new Turtle Rehabilitation Centre located on Fitzroy Island. Educational Tours are held every day at 2pm, tours are limited to 15 people. The centre relies on donations from local businesses and the general public which go directly towards the maintenance and feeding of the sick and injured turtles. Find out more -->

One of the easiest ways to get involved is to download the Eye on the Reef app and share photos of what you have seen out on the Reef. This can be anything from wildlife (including protected species,) to pests like Crown- of- thorns starfish or marine pollution, to special events like coral spawning.Everyone's contribution is welcome. You can also use this app to help identify the wildlife you've seen and share your Eye on the Reef sighting photos on social media. Observations and information gathered will then contribute to science, management and the protection of this natural wonder.

Eye on the Reef has been used to record thousands of sightings of humpback whales, dwarf minke whales, dugongs, dolphins, whale sharks, birds, sea turtles, and many more reef creatures. The more people report their sightings, the more it helps to build knowledge about the diversity, abundance, habitats and range of marine animals. The app can also be used as an educational tool to find out more about your favourite Great Barrier Reef creatures. Selected sightings will also be displayed on the Great Barrier Reef Marine Park Authority website and Facebook page. Download the free Eye on the Reef app from the Google play app store or the iTunes app store — to send in real-time sightings and simultaneously share those sightings with your Facebook friends.

Coral spawning is one of the most spectacular events to occur on the Great Barrier Reef every year about four to five days after the full moon in October or November and sometimes in December. This mass reproduction involves colonies and species of coral polyps simultaneously releasing tiny egg and sperm bundles from their gut cavity into the water. The phenomenon — which only happens at night — resembles an underwater snowstorm. But rather than being all white, there are also clouds of red, yellow and orange. All the bundles rise slowly to the surface where the process of fertilisation begins. The time of year that corals spawn depends on their location. Inshore reefs usually start spawning one to six nights after the first full moon in October, whereas outer reefs spawn during November or December.

• Marine turtles have been present in the oceans for more than 100 million years — since the time of the dinosaurs.

• The estimated lifespan of sea turtles range from 60-80 years.

• A resting or sleeping turtle can remain underwater for 4-7 hours.

• Sea turtles have the ability to detect the Earth's magnetic field and use it as an orientation cue.

• A fully grown leatherback turtle can reach a length of 2 metres and weigh up to 900 kg.

• Baby turtles take 6-8 weeks to hatch and the sex is determined by the temperature of the nest. Warmer sand means more females and cooler sand means boys.

• Baby turtles spend 20-30 years riding the ocean currents before returning to their birthplace to nest.

• All turtles are omnivores, meaning they eat what they can. Favourite staples include sea grass and jellyfish.

Whales most commonly sighted on the Great Barrier Reef are Dwarf Minke Whales and Humpback Whales.

Humpback whales migrate from Antarctic waters between May to September to calve in the warmer waters and build up strength over the winter before they return to the Antarctic in summer.

July to September is the peak season to encounter dwarf minke whales. Naturally inquisitive, they often come close to boats and swimmers. Some reef opertors hold permits that allow guests to swim with dwarf minke whales if encountered – a truly unforgettable experience!

The most commonly sighted sharks on the Great Barrier Reef are the Blacktip and Whitetip Reef Sharks. Both these sharks are quite timid and pose no threat to divers and snorkellers. They are usually found in 8 metres or deeper, and you will often spot them cruising around the shallow waters or resting on sandy patches in the reef.  When disturbed they will swim away very quickly, reef sharks are scared of you much more then you are of them! 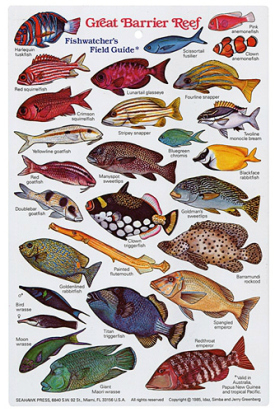 The Great Barrier Reef is home to over 1500 different species of tropical fish. See what marinelife you can identify . 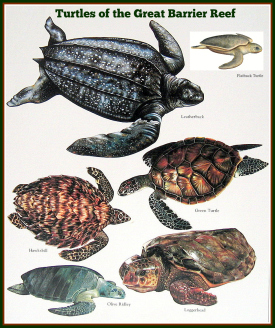 Six of the world’s seven species of marine turtle occur in Australian waters, including the: